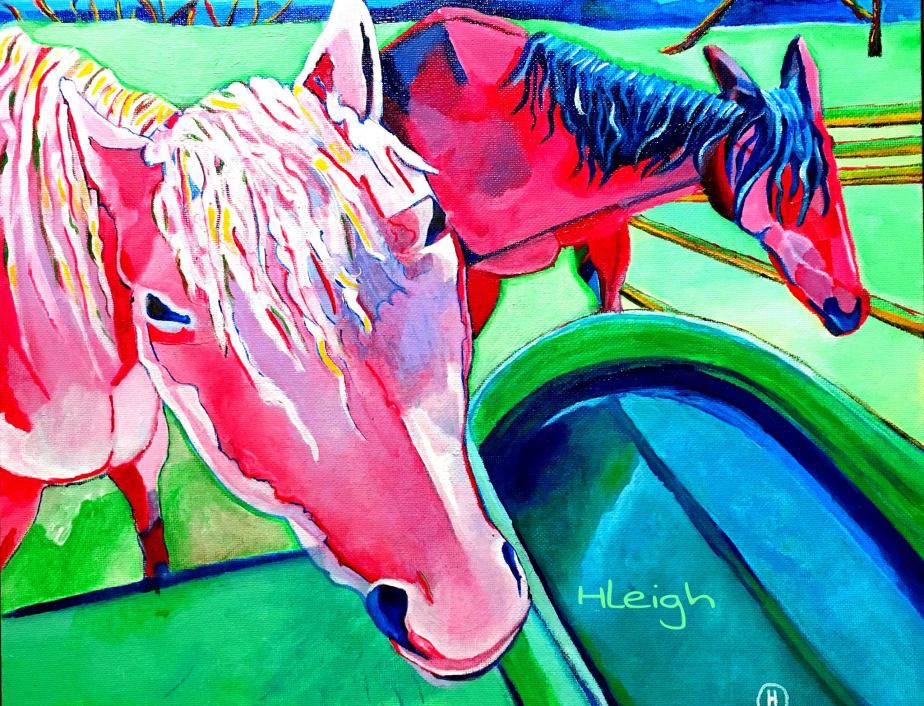 Over this past summer, I had a huge blessing of being able to take care of four senior horses. I thanked spirit every day for being given the gift of being around this small herd. I started a youtube channel that used the wisdom the horses had for each days reflection which you can find on youtube as Lessons From The Farm. There are Life Coaching prompts in each video and my bio is there too. This piece was in adoration of the two main horses of the herd. I felt blessed to be able to take care of this mare as it was her last summer on our planet. I know spirit didn’t make a mistake giving me the opportunity of being her care taker through her final process of ageing. Also, these two reminded me of a couple I met in Galveston once on the fishing pier. They had been together for over 60 years and were so happy to fish in silence together. This is part of the intimacy series and speaks to spending a lifetime with someone, being blessed with friendship, love and spending hours with another being whom you trust as your own body.

The original is still available as are prints on society 6. you can order prints on anything you want at http://www.society6.com/hleighart. Other wise , the original is framed in wood and is an 8 x 10 on canvas board. I believe the price is $175.00.

This piece is about ageing and realizing that our bodies give out and we start to see our mortality. It came about as I was walking my horse Reggie who is a senior. We were both limping together, he had a sore hip and I had a sore knee but we were in it together and happy to be. I remembered my girlie fantasy’s about heart horses and finally found my heart horse later in life, when we limped together in freedom. It was a fun, whimsical painting. Reggie brought out my playfulness and reminded me to take life in stride, Zen out and enjoy ageing.

Half Human, Half Horse, coming from a bottle? This is part of a series that is a work in progress called the “Intimacy Series”. Works in this series are stories that tell about the masks we wear in our relationships, the levels of depth we fall in while getting closer to people in our lives, the identity that we grow into as a result of being influenced by others, the selves that we shed as we grow into bigger selves, all teaching each other and growing together. Humans are amazing. So are animals. Again, because my rejection and abandonment scars have been sometimes excruciating for me to deal with, I detach in the safety of horses and tell the story sometimes how I wish I could be as close to other humans as I am with horses. This piece is about becoming one unit even though it’s awkward and uncertain, sometimes feeling severed and weird, disconnected in the process.

Guess what? I am also looking to do the work. I do psychic interpretations that tell your unique story. You can check out the painting below that describes the process and how I do it. The delivery method is through a combination of my education, who I am as a person and my own recovery and healing process. If you are curious about Life Coaching, you can view my coaching site at http://www.silentmooncoach.com. I love working with people at the root and using my artwork as a means of connection. My number is 612-280-6033 if you’re interested. I respond to text messages also. 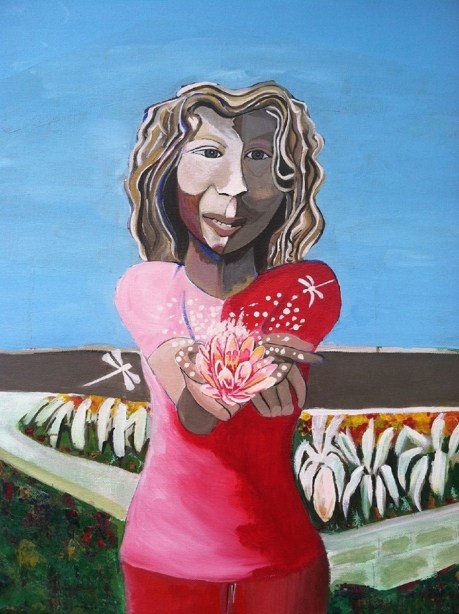 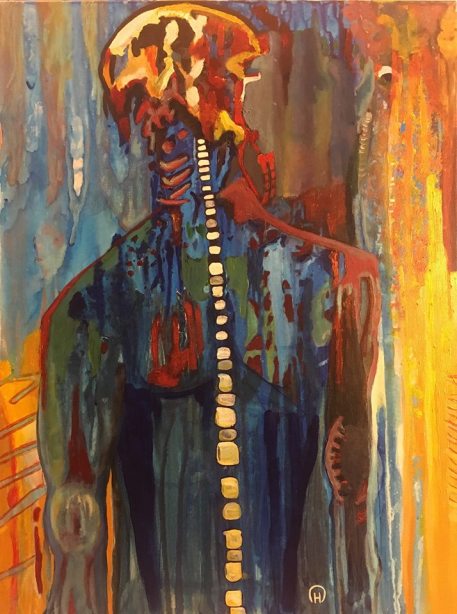 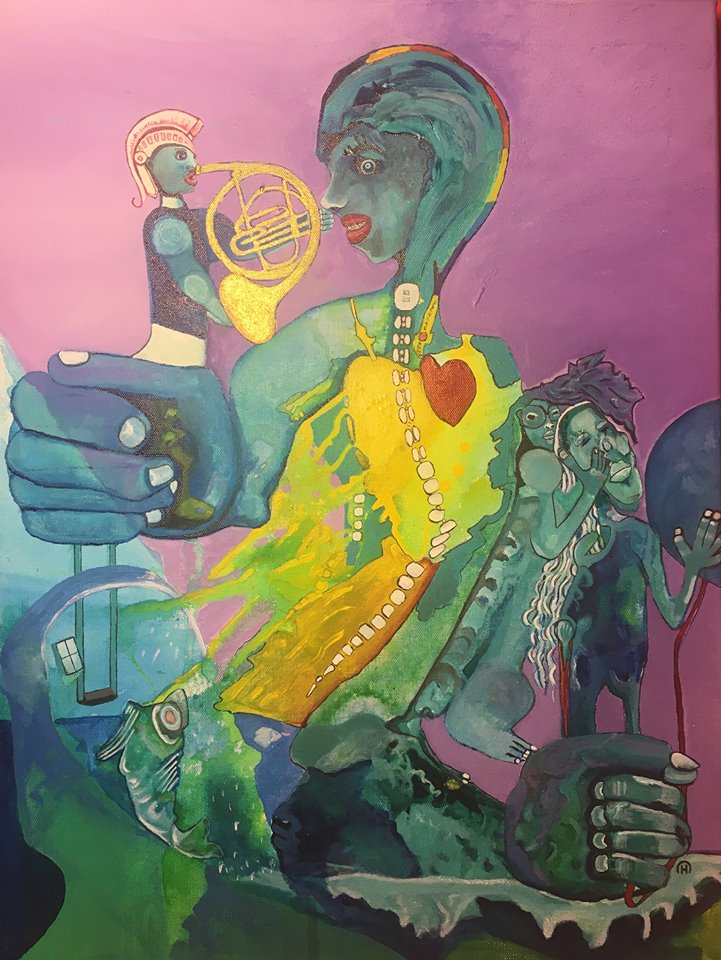 So I just received permission to talk about this painting from the commissioner and good friend of mine. She came over and put some money down and asked me to paint her soul. I laughed at first thinking there is no way on earth I could ever paint her soul because to me, her light is so bright, there isn’t a color that could match it but when I realized she was serious, I started spinning about the style. Initially, extreme abstract was going to be the winner as it is the style that leaves so much up to the interpretation of the viewer. It was a safe option, after all, we are fed more than our fair share of information each day, it’s nice to not be told what to think for a couple of minutes and be able to zen out and come up with our own conclusions about the story. But then I felt that would be an injustice to her because through the years of our friendship, we have endured some of the most raw, riveting and not so great but beautiful experiences together and I wanted a substantial representation of the gifts she gives to not only the world, her family, and the smaller community, but to me on a personal level. So I began by sitting in silence with her picture in my head reflecting on her gifts. Then I decided to start with line relationships, splattered some paint and let it drip, then took a full day to look at the drips and see what I saw. Then the ocean idea came which I will break down. Just think of the ocean and what it is. My friend is a powerful force of love and depth. She once told me “if I am not here and you are faced with a big decision, err on the side of compassion, and beg for difference later”. She also said “whoever comes through your door, love them for who they are, whether you can help them or not. Don’t expect them to be different, just love them.” Well the force coming out of the water then birthed itself to my awareness. Now, this friend is in a position to help people. She is also a mother, and also an individual who has her identity that she was born with who has nothing to do with anyone else’s experience or impression of themselves on her. She is not a role, and is also a role in the lives of the people who are in relationship to her. So I looked deeper into who her soul is without being in roles and relationships and without being defined by words or ideas. Then the world made its awareness to me as she is all encompassing of the exact energy of the world and yet separate from it. The hands then made an appearance as she holds her balance and destiny in each hand, one of the community that she works in and one of the seed that she has grown and is trying to send into the world as a life force who will also be a passionate inspirer as she is. So within this wave that she harbors deity like energy from, mermaids if you will from the depths of the ocean, or love energy from the emotional wisdom that water holds, she is able to balance between the worlds that she lives in because she is grounded in her heart that connects both worlds together. She worries that her seed will prosper or get eaten by the world, she protects those whose burden is as heavy as the world and begs to hold their innocence and covers their ears so they can preserve the goodness in their souls. She is a life giver. She never gets lost as she wears the dress of love flowing wherever she touches. The original idea of this painting also had a spider web behind her but I canned it as I wanted to create zen space around her. Traditional the color purple is the color of psychic energy. Clairvoyant people, people who have the gift of sight are said to have purple aura’s. My friend is extremely intuitive and can see what is brewing under the surface of people and just knows what is needed to make others look into themselves and feel better about who they are as energy fields. Finally, the fish represents the old adage of ‘feed a man a fish, he will eat for a day, but teach him to fish he’ll eat forever”. My friend will walk you down the road of self knowledge and allow you to come to your own conclusions but she coaches you with love that you will be ok and that you’re loved exactly how are you. The swing and the window showed up on their own probably to give her a resting space while she’s doing all of the hard work.

So that is her painting. I couldn’t actually paint her soul but I could wrestle with the expression of it and hopefully interpret it in a way that made sense and resonated with her own truth about her soul.

From a space of raw vulnerability,
H.Leigh

This Painting is Sold.
Brand New One. 18 x 24, acrylic/pastel on canvas. Ready to hang.

I love merging aspects of biological and natural sciences with art. In my healing process, I’ve noticed the patterns in life as they relate to my identity; atoms make up patterns of the universe and color and sound break down into atoms. Through creative process while in recovery of alcohol and childhood trauma, I get to control and take my power back that was taken from me through the creative process and pattern manipulation. The above painting speaks to the debris left behind by the abandonment of parental figures and also key relationships throughout life. Originally I was going to put a horse in the painting which you can somewhat see to the right of the figures head. Horses pretty much raised me as I’ve discussed in my earlier series called “Recovery Horses”. Through the times that I felt completely alone beginning around 6-8 years old, horses have been my friends and have carried me through those times. You can read more about my connection to horses on my life coach website at http://www.silentmooncoach.com. But for the purposes of “Ex-Communicated”, going back to science and patterns, art has given me my power back by being able to create paintings based on how I want to tell my now story. Even though the figure is turning away from something, the bright colors give me hope to rise above the pain of being left behind. Mother Teresa once said that it’s not the lack of food that makes people starve, it’s the lack of love. When I paint, I almost always feel dread in my process. I share these deep processes with the reader in hopes to help in some way. THat’s the only reason. I hope it helps. You are not alone in your struggle whatever it may be. There have been three successful suicides in my family and I wish to be able to offer help to anyone that may feel they don’t belong. Abandonment and rejection can take your breath and soul away from you. That is what this painting is about. It’s about hope and letting you know you are not alone. Reach out to me any time you need.
H.Leigh
612-280-6033